Frappe: A Delight To Your Taste Buds. I have to create a confession before we dive, heading into and comprehend the universe of Frappés. I’m mildly intimidated about coffee shop menus. Do you also feel like this? Just imagine yourself at the side of a quiet street holding a cup of mocha or a white mocha or even a chai crème and enjoying the day. Doesn’t it sound familiar? You’re about to get introduced to the strong flavors of the world of Frappé!

All you want is a nice, powerful jolt of caffeine when you go in, but you face fantastic terminology and more phrases like “Iced Skinny Cinnamon Dolce Latte”, anyone?

Like my coffee, I like my coffee names-simple, easy and efficient. But I stumbled at “˜Frappé’ as I should’ve, and that’s how my coffee affair started. As a result, I became interested in its background.

Frappé implies “iced,” literally, and it came from the middle of the 19th century. Although we now use a cold coffee beverage to define a partially frozen (for example, a fruit juice) drink or a liqueur on rasped ice. So how has such a famous coffee shop setting developed? We got to thank the Greeks for that!

A frappe is an iced drink that is shaken, mixed, or beaten to create a delicious, dense, and refreshing drink served with cold, frequently flavored cream and toppings. You can add coffee ice, sugar, milk, vanilla, and sweet sauces before or after the coffee. It depends on what you shake or mix: a shaker, a mixer, or a blender. According to experts, an ice crusher is a better choice than a mixer.

Though a frappe has been traditionally made with coffee, you can make other flavorful frappe drinks with teas, juices, or hot chocolate; the possibilities are endless. It’s hard to count the types of variations this drink has worldwide since its emergence in Europe decades ago. Frappe comes from the French word frapper, which means to slap, knock, or beat. So coffee or fruit? The answer is a straight “˜whatever you like it to be.’

Exploring The Origin Of The Frappe?

The mid 19th century saw references to a few cold-coffee beverages called’ Café Frappé.’ Some of them were very slushy, others like ice-serving coffee. It was not until 1957 when the Greeks invented an instant coffee version of the café Frappé, that it became a famous coffee drink.

A story goes that a Nestlé representative showed kids instantaneous chocolate drinks by blending the base of chocolate and the milk into a shaker. A worker of Nestlé was on his coffee break when he saw there was no hot water. He then had the bright idea of mixing his instant coffee granules with cold water and ice cubes in the shaker to get his coffee fixed. The remainder is history, as they say.

You either need a powerful blender or something to create crushed ice with, for example, a manual ice crusher or an online snow cone machine to blend crushed ice into a basis to create a Frappé.

You can either sweeten your frappé with sugar or use a more easy to dissolve unflavored sugar syrup”“100 g sugar and 250 ml water. You can create it yourself. Just follow the formula for our flavored sugar syrup and take the flavorings out to create a simple version.

For a single serving:

Now, if you want to spice things up with a little touch of alcohol, this recipe is for you: 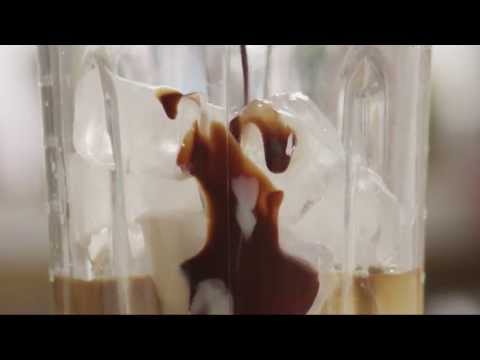 Technically there is no single recipe for a frappé”“it means a cold blended drink, like a slushie. In Greece, you may be served a sweetened coffee, shaken until frothy and poured over ice cubes; in France, it may be coffee, ice cream, and ice whizzed together in a blender; and in America, it may be coffee blended with milk, sugar, and ice, topped with whipped cream.

A mocha frappé has a touch of chocolate added, but a frappé may not have any coffee in it at all”“fruit juice blended with fruit and ice makes a fruit frappé.


The Greeks have a straightforward recipe for frappé. You add one or two teaspoons of instant coffee granules, sugar for taste, and a little water in a cocktail shaker or mixer. Using a shaker, you get the typical frothy layer at the top of the coffee. You can serve this with or without milk.

The version that is now popular in coffee shops all over the world is to use a blender. You usually throw in ice cubes, milk, sugar, strong coffee, a little water, flavors, or syrups of your choice (even alcohol!) in the blender, give it a good whirl and pour it into a tall glass. Top it with whatever your heart desires -whipped cream, ice cream, melted chocolate -you don’t have many options to go wrong here!

Is Frappuccino Another name for Frappé?

Now that’s a hell of a question! It’s something that has got me earlier. Before we get to the real description, it will help us realize that “˜Frappuccino’ consists of two words- “˜Frappe’ and “˜Cappuccino.’

In the region of Boston where the drink came from, a frappe is a dense ice cream shake.

They modified the recipe slightly, though, put it under the banner, and it is still a ubiquitous drink on their menu. A mixture of various cool beverages, like iced coffee, milkshakes, Italian cappuccino, and other flavorings and syrups, is the recipe itself. Starbucks also sells bottled versions of their Frappuccino in grocery stores and vending machines.

So you see, there’s nothing to do with Frappé and Frappuccino, end of discussion!

Nowadays, it’s hard to find streets that are not filled with coffee shops. Coffee shops are often turning back to fresh clients with the explosion of coffee culture and differentiating beverages from the competition. Well, customers couldn’t ask for anything better. So you’re never going to run out of frappe variants.


The remainder of the globe prefers using the ever more famous expresso while Greeks stick to the tradition and use instant coffee granules. Just add some sugar and ice and serve a double espresso! Certain coffee shops might add liqueurs such as Kahlúa to the blend. Others can add a scoop of ice cream to their drink.

Although Café Frappé is mostly linked with an immediate Greek variant of coffee today, the remainder of the globe has taken the expresso version over the past two centuries, merely shaking with a double espresso of some white sugar (2/3 complete of ice shaker) and pouring it straight into a glass.

Read more about How to Make Cold Brew in a French Press? Quick Easy Steps

Other interesting variations are also there. The Bulgarians use Coca-Cola rather than water to shake their strike! The frappé is produced of cold milk rather than with water in Denmark. The Serbs use milk or ice cream to create a frappé and put a dollop of whipped cream.

What is Frappé? Let’s Wrap Up the Frappé Talk:

The frappé is your best bet when you’re craving a cup of coffee, but you can’t drink a warm beverage! Make one of the many changes from the comfort of your home to the next coffee store. But do try and experiment when you see something new and exciting on the menu.

The Frappé is a very satisfactory drink despite its modest list of ingredients. You’re bound to discover a new taste every time your mouth touches the delight. The last touch of inspiration-if it looks good, go for it, and you might not regret it later!