How to make Arabic coffee at home? Arabic coffee is one of our favorite traditions. One of the fun aspects of trying different coffees is knowing the different cultures of the world. In various cultures, drinking coffee is a traditional social activity, and Arab coffee is no different. This coffee is prepared by boiling on the stove in a small pot called briki. When ready, it is transferred to a decorated coffee pot called dallah to serve. Although there are many versions, Arab coffee is generally served strong and without sugar, flavored only with cardamom.

Meetings in Lebanon & Middle East often revolve around food and drink. One of the most common ways to entertain visitors, neighbors, and friends is to prepare one pot after another rich Arab coffee to enjoy.

A delicious conversation. While we think the Terrace Restaurant specialty coffee is only the best in town if you want to try to replicate this authentic Lebanese experience at home, here are seven simple steps to prepare Arabic coffee for you.

First, Arab Coffee is not prepared through a Filter; it is boiled. Nawal Nasrallah, the author of the Garden of Eden Delights cookbook, explains that Arab coffee is traditionally produced in a special coffee maker called dallah, as shown above. Still, it can also be made in a regular pot on the stove. (The shape of the dallah, with its wide base and narrow top, helps in the coffee foam.


To make the coffee, the lightly roasted beans are ground into a powder and added straight to the boiling water, often with cardamom, if the cardamom is no longer ground in the beans and left for about 10-15 minutes. After boiling, the coffee is left to rest for one or two minutes so that the beans fall to the bottom of the pot.

Coffee is served in cups without handles called fin Jan. Only a third of the cup is full, explains Marlene Matar in her book The Aleppo Cookbook. It is typical to fill the cup several times.

Arabic coffee has a strong and bitter taste. It is often served together with dates (or another dessert) to counteract the bitterness. However, it should be noted that sugar sometimes appears these days.

Spices play an important role in Arab coffee. The most common herb used is cardamom. It is added in large quantities, Lamees Ibrahim writes in the book of Iraqi cuisine. Cardamom is sometimes ground with coffee beans and boiled together with coffee. On the other hand, it is added to the coffee after a first boil and then boiled all together again.


Cloves, saffron (which gives it a golden color), and sometimes rosewater appear in Arab coffee. These spices are just one of the reasons to drop your triple-twenty-half coffee and try something new.

How to make Arabic coffee at Home in 7 Simple Steps 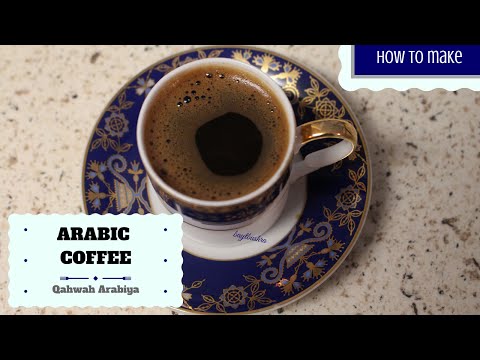 What is needed How to make Arabic coffee at Home?

Finding the right coffee beans and grinding them correctly can be the difference between good tasting and great tasting coffee. For the boldest flavor, choose light to medium roasted beans and grind them into espresso coffee (extremely fine). Cafe Najjar (from Lebanon) is one of the favorite brands; You can find these beans at most Middle Eastern stores and the specialty coffee vendors.

You can buy ground cardamom or, if you prefer a fresher product, buy whole cardamom pods and grind the seeds yourself. For doing this, crush the pods with the back of a spoon, then grind the seeds with a mortar and mix with a fine powder. Set aside for later.

Pour the water into dallah and boil on the stove. Once the water begins to boil, throw out the dallah for 30 seconds (or just long enough for the water to cool slightly.

And then, add ground coffee to the water and return to the stove, but do not stir the mixture.


Once the water begins to boil again, lower the burner heat to low and allow the coffee to brew for approximately 10 minutes, or until the foam starts to rise to the top of the dallah.

Then remove the dallah from the stove long enough for the foam to back up to the water level. At this time, sprinkle ground cardamom on top and put the coffee back on the stove. Heat the coffee until the foam reaches the top of the dallah.

Once a foam-filled head has formed, remove the dallah from the stove and let it sit for 5 minutes. During this period, the foam will recede, and the grounds should settle to the bottom of the pot.

After soaking the coffee for 5-10 minutes, pour into the finjans, and fill the cups halfway. You can choose to pour your coffee through a strainer to catch spices and coffee grounds, but it is unnecessary.


Note: Traditional Arabian coffee does not use sugar but is often served with something sweet, such as dates or chocolate. Other ingredients that would affect the taste of coffee, such as milk or cream, are also frowned upon.

Which Country Does Arabic Coffee Belong? When you listen to “Arabic Coffee,” you may wonder which country embodies the service ceremony’s culture and fanfare. The Arab League comprises 22 countries, including Saudi Arabia, Turkey, Egypt, and Lebanon, which make up the Middle East. Each region (and each family) has its personal touch for coffee. A common characteristic is that none of them are served with milk.

Saudi Arabian coffee is prepared with the same method as the previous recipe. It can be prepared with any roasted coffee, but generally, you will see the light roasting with the addition of cloves and saffron. This variation will typically be served with dates.

Turkish coffee is prepared with a little sugar and without cardamom. The coffee beans are ground very finely in powder. It is a Turkish tradition for the guest to ask the guest how they would like their coffee, i.e., how much sugar to add. Out of habit, you should only drink one cup.


It is usually served with Turkish delight or other desserts. Turkish coffee plays an important role when it comes to marriage. The bride should serve coffee to the groom and his family.

Egyptian coffee is similar to Turkish coffee but with spices such as cloves, cardamom, and Nutmeg.

Lebanese coffee should be stronger than espresso, using about 1.5 ounces of water per teaspoon of coffee. The addition of cardamom and sugar is optional.

In Middle Eastern culture, there are many ways coffee is enriched with sweeteners and spices, depending on the region. It is the essential tradition that unites them all.

If you like the article How to make Arabic coffee at Home? Please let us know. We would love to hear from you.